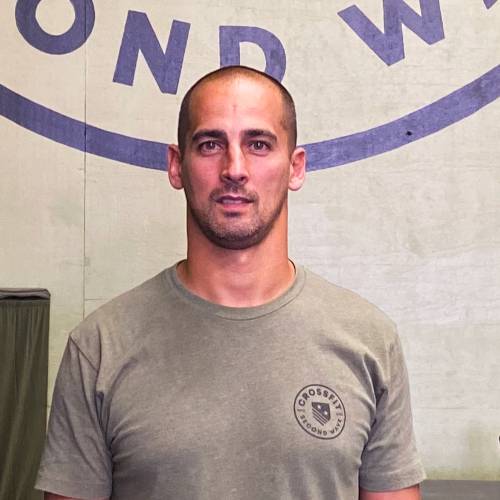 CrossFit Level 3 Coach
Bachelor of Science from the University of Connecticut - double major in Biology and Psychology, minor in Neuroscience

Grew up in Connecticut where I played lots of sports as a child but settled on football in high school. In 1997 I joined the Army and spent 4 years as an Infantryman in Fort Drum, NY. After the Army, I attended the University of Connecticut where I majored in Biology and spent all my free time playing Rugby. After graduation I moved to NYC and was looking for my new passion, that's where CrossFit entered my life.

I started coaching in 2013 when I friend of mine opened up his new gym (CrossFit Gantry). People started coming into the gym and I saw their bodies and personalities change from weak and timid to strong and confident. I watched people come into the box, having never thought about their health and being terrified of anything that even resembled a sport, truly become ATHLETES! I enjoy watching the high-level athletes lift heavy and walk on their hands, but what I'm truly passionate about is taking someone who struggles to do everyday things like pick up their kids or get out of their car to become strong capable athletes. The name of our gym relates directly to that passion. The body adapts to exercise in three phases. The first phase is largely neurological. The body learns to make better connections to the muscles which are already present in your body. The second phase is where your muscles actually become bigger and stronger, this is where the real change occurs. The third phase is finding ways to move faster and more efficiently, which is not a bad thing, but for everyday people trying to be fit and healthy, it's not worth the risk of injury that has given CrossFit a negative stigma as a "dangerous" exercise program.

Growing up as a skinny kid I always struggled to gain weight and keep it on. During my earlier years in NYC, my clothes started to fit a bit tighter and tighter. One weekend while visiting a friend in Washington, DC my not so sympathetic buddy asked me how much I weighed and proceeded to tell me that I had officially become FAT! The decades of eating as much as I can and lifting weights had finally WORKED, but it worked so well that I had overshot my goal of being big and strong and I was now overweight. The buzz of CrossFit had made its way around NYC so I decided to give it a shot. The thought of paying $200 a month for a gym membership was a hard pill to swallow at first, but after attending a few classes, I was HOOKED. I felt like I was on a team again and I had a knowledgeable coach to guide me back to looking and feeling healthy. I saw such great results and enjoyed it so much that I decided to become a coach myself and help spread the word!